What’s it Going to Take to Get Kate Brown Impeached?

This one ought to land in the record books somewhere. Oregon Governor Kate Brown announced Thursday she intends to sign into law a bill requiring insurers to provide free abortions for all Oregonians, including illegal immigrants, according to a July 6 Washington Times article. Brown explained that “the ability to control our bodies and make informed decisions about health are critical to providing all Oregonians the opportunity to achieve our full potential and live productive, thriving lives…Attempts to deny access to contraceptives and family planning are an attack on all Oregonians, particularly women of color, low-income and young women.”

Aside from the moral repugnance of publicly funded infanticide, the sticker price for this policy is $10.2 million dollars. And that’s likely to be just an estimate; when has the government ever come in under budget? What Brown announced is an imperative to provide free abortions to anyone who may ask ― a blank check. The actual long-term cost could wind up being much greater.

Any public policy must withstand scrutiny and be found heavier in the “pros” column than the “cons.” Otherwise it needs to be changed. If we scrape off the leftist clichés about “reproductive rights,” the “ongoing scourge of racial and economic injustice,” etc., there isn’t much left but malfeasance, troubled waters and taxpaying citizens forced to pick up the tab for it all. When did an illegal alien’s desire to kill her offspring become more important than a hardworking citizen’s right to fair representation from his governor?

The State of Oregon is facing a $1.6 billion funding

gap in spite of record low unemployment and burgeoning state revenue. No doubt there is plenty of blame to go around, but financial trouble seems to swirl around Gov. Brown in a peculiar way. Taxpayers were informed in 2002 of a $4 billion PERS budget deficit (Public Employees Retirement System). That year, Gov. Brown, as Democratic Leader in the Oregon State Senate, said publicly, “PERS ought to be fixed. But now is not the time.”

Oregon has long had a culture of disjointed financial priorities. As boondoggles like PERS continue, essentials such as infrastructure are ignored. I drive Interstate 205 almost daily, and it has an almost third-world quality to it. The concrete is so worn down that the surface is like a cobblestone street. The road noise drowns out my radio. I cringe, pondering how much sooner I might have to replace my tires. I can’t even calculate how many hundreds of hours I’ve spent over the years pinned in crawling traffic during rush hour. Thank God for MP3 players. Oregon lawmakers just unveiled an $8.2 billion transportation package which would be funded by periodic increases in the state gas tax; a first-ever statewide employee payroll tax; a 1 percent tax on new cars; a 5 percent tax on new bicycles; and increased title and registration fees. Excuse me, sirs/madames: we already have to take out bank loans before we go to the DMV. How is it that, after cutting into my wages so deeply, you haven’t even accomplished the basics?

Since 2002, the PERS deficit has ballooned to $22 billion dollars. That’s about a third of Oregon’s entire 2015-2017 budget.  It’s bad enough that PERS has created a sort of aristocracy out of public employees (PERS lavishes wages and benefits on them that are well above what is received by those in comparable private-sector jobs). But then injury is added to insult as we run up a colossal debt in service of a wretched sweetheart policy. It’s beyond irresponsible. During the years this debt was being run up, Brown rose through the political ranks and steadily gained greater influence over the budget process. She became Oregon’s Senate Majority Leader in 2004, then Secretary of State in 2008. Now, as governor, Brown is literally in the driver’s seat and seems as blithe as ever on the subject of Oregon’s looming financial crisis.

Margaret Thatcher said famously, “The trouble with socialism is that eventually you run out of other people’s money.” This is not a lesson Oregonians have managed to learn. We are hemorrhaging financially even as we continue to spend like drunken sailors, with no 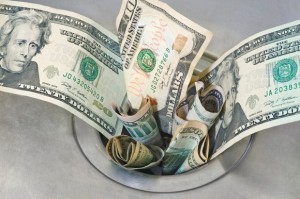 end in sight. Here on full display is the naked folly of the liberal narrative, which has overshadowed caution, professionalism, sense and reason. The State of Oregon, steered in large measure by Kate Brown, is running an 11-figure ponzi scheme. You and I are paying for it. This rises to the level of misconduct and even criminality. It’s time to hold our leaders accountable.

I am a freelance writer by trade, philosopher and comedian by accident of birth. I am an assiduous observer of humanity and endlessly fascinated with people, the common elements that make us human, what motivates people and the fingerprint of God in all of us. I enjoy exploring the universe in my search for meaning, beauty and friendship. My writing is an extension of all these things and something I did for fun long before I ever got paid. My hope is that the reader will find in this portfolio a pleasing and inspiring literary hodgepodge. Good reading!
View all posts by Douglas Abbott →
This entry was posted in Uncategorized and tagged broke, budget gap, catastrophe, corruption, crisis, debt, deficit, free abortions, Gov. Brown, Kate Brown, liberalism, Oregon, PERS, ponzi scheme. Bookmark the permalink.