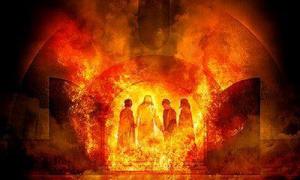 I have come to the conclusion that God often allows the Christian to go through such complete emotional/psychological dismemberment that nothing is left except the thing he started with — following Christ no matter what may come. I came to the point today (and am still there for the most part) where I literally had nothing to go on but my commitment to Christ. Even that was a remote thing that no longer really made sense, and yet it was still there, insisting on being carried through.

As some are aware who are close to me, I am going through radical changes in my life. By radical, I mean going against the flesh and my personal desires so drastically that at times, I am barely able to function because of the stress involved in this kind of profound change. Not everyone has this kind of battle to fight. As for me, I thought I had gone through at least my share of excruciating trials. It still seems ludicrous that someone should have to endure so much pain just to obey God. But who can say no to him?

On top of everything else, I am dealing with enormous difficulties in my personal life — financial stress, relationship problems and unstable housing (through no fault of my own). There is, of course, the discomfort of watching the world go completely nuts, and America right along with it. De-evolution has been fully accomplished; insanity is now the main guiding force of nations, organizations and individuals. Welcome to the 21st century.

I made a choice a while back to change careers from the hospitality industry to the mental health field. I thought my work was meaningless before. Now I’m part of an industry that is dedicated to helping people get sicker. I’m sure the leaders of the industry wouldn’t put it that way, but how else can you characterize an industry that is committed to 1) treating clients primarily with harmful pharmaceuticals, 2) client-centered therapies that emphasize self-determination (“Excuse me sir, but isn’t self-determination precisely what caused these people to become addicted to drugs?”), 3) preventing its counselors from giving clients the thing they need the most — spiritual guidance (particularly if the guidance is of a Christian orientation), 4) so inept that there have to be endless layers of accountability to help state and local governments, review boards and agencies avoid responsibility for constant blunders. All this oversight is managed through paperwork, which takes up a huge portion of a clinician’s time. The whole industry has grown into a ponderous bureaucratic monster that monopolizes the time and resources of agencies that are already stretched to the limit.

Of course, many industries are in such dire straits. After all, the whole world is full of crapola. I am left wondering if I am the proverbial square peg in a world full of round holes. How is a person supposed to get excited about going to work these days?

Yesterday, I realized I was becoming far too stressed out about all these things, so I resolved to spend a carefree evening with a friend, with whom I watched Raising Arizona and talked about positive things. This morning, my friend, who is constantly telling me to relax, sent me off with good wishes and a foil-wrapped bundle of salmon for my lunch. It was a very nice gesture.

That’s when I got reminded of that all-important rule: when it rains, it pours.

I drove downtown to attend a medication training and returned to my car afterward to find a $90 ticket under my windshield wiper. It turns out I was parked in a “loading zone” that was strategically placed away from any doors, entrances and curb ramps and whose curb had only a few flecks of paint left on it. There are few things that hurt as much as impotent rage, especially when you’re the kind of person whose brain never shuts off. Since I am such a person, I had to listen to my own mind supply me with the full back story of how I unwittingly lost $90. The scene opens down at some city administrator’s office:

“Hey, boss! I noticed you changed the work order here. I thought we were supposed to be painting curbs this month.”

“Yeah, we just don’t have the budget for that right now.”

“Wow. Because there’s hardly any paint on most of them right now.”

“Respectfully, sir, I do worry about it. Those curbs are supposed to be clearly marked. People are getting $90 tickets.”

“Look, don’t get all sanctimonious with me. These are the same people that scream for the mayor’s head whenever there is an increase in property or sales taxes. We’ve got to pay for city services somehow.”

You get the picture. 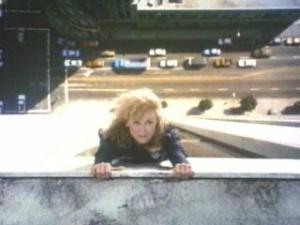 So as I was trying to slow the flow of steam from my ears, I decided to stop at a coffee shop and try to relax over a smoothie. Only when I went to get some items out of my bag, I found that my friend’s salmon gift had leaked all over everything — car interior, paperwork, electronics, etc. My car will smell like salmon for several years.

Just when I was wondering which psychiatric hospital would treat me, humor came along and saved the day. I was driving south on Division Street on my way to work a swing shift. As I was getting up to speed, I looked over to see a little Honda hatchback accelerating to get ahead of me. Out of habit, I accelerated to keep ahead of him. The speed limits here are already ridiculous, and Portland drivers routinely go 5-15 MPH under the limit. So I try to stay out in front of the pack. Otherwise, I would end up like the guy at the beginning of Office Space, who is trying to drive to work in heavy traffic and notices that an old man with a walker is making better progress on the sidewalk than he is in his car.

But the driver of the Honda was determined to get ahead of me. I heard him hit the gas. But alas, his car was one of those models that inspired the term “rice rocket.” Even without putting all my horsepower into it, I kept ahead of him easily. Still, the guy wouldn’t give up. The whine of his little engine grew more and more strident as he kept the throttle opened all the way up. Now I was starting to laugh. I still didn’t have my foot to the floor, and the driver of the Honda wasn’t getting anywhere. I started to wonder if he had a lawn-mower engine under the hood. As if I needed any more reasons to laugh, I looked over again and saw that the driver’s passengers were both attractive young ladies. No doubt, he had been trying to impress them.

Because of my impromptu race on Division Street, instead of thinking about my troubles, all I could think about during my shift was the epic comedy of listening to the driver of the Honda redline his vehicle with little apparent increase in speed.

So I avoided madness for another day. Here’s a shout-out to Jesus, who gave everything for me, and a word of appreciation for people who drive Hondas as though they were Ferraris.

I am a freelance writer by trade, philosopher and comedian by accident of birth. I am an assiduous observer of humanity and endlessly fascinated with people, the common elements that make us human, what motivates people and the fingerprint of God in all of us. I enjoy exploring the universe in my search for meaning, beauty and friendship. My writing is an extension of all these things and something I did for fun long before I ever got paid. My hope is that the reader will find in this portfolio a pleasing and inspiring literary hodgepodge. Good reading!
View all posts by Douglas Abbott →
This entry was posted in Suffering and tagged bureaucracy, comedy, commitment, crazy, dedication, despondency, devotion, God, insanity, Jesus, laughter, looney-tunes, madness, mental health industry, paperwork, rage, saved, secularization, survival, the edge. Bookmark the permalink.

2 Responses to The Edge