I’m losing my sister. Erica has been fighting illness for months and had just started on a third round of chemo when we found out that her cancer had advanced rapidly, leaving her with no more than a week or two left, barring a sudden reversal.

This isn’t Erica’s first rodeo. She fought and survived breast cancer several years ago, but part of the banished disease managed to ensconce itself in her liver. Now here she is, completely subdued by a freak of biology. I’m not ready for this. How could I be? She’s only 47. The words “hospice” and “Erica” don’t belong in the same sentence.

I know I’m supposed to find God’s blessing in this (Romans 8:28). However, I see nothing in this but pain and loss, distributed liberally to everyone in the family, like the proceeds from a corrupted pinata party. We’re all standing off to the side, helpless, like bystanders at a neighborhood blaze where the fire trucks don’t come.

When I first arrived at the hospice, I was angry and could find no peace with what is happening to Erica. How could God let her waste away as he was doing? She has a husband, two young daughters, a loving family and many friends who will miss her. Her departure is leaving me with a smoking crater in my life. She is my only sibling. Once she’s gone, I will be the only occupant on our entire generational shelf, like a lone tree in a field of rocks.

Erica is two years my senior and has always been the strong one. From the beginning, she has possessed a powerful gift for adaptation and survival. When she was 6 months old, my mom was feeding her formula when Erica took the heavy glass bottle from her and held it in her own tiny hands while she drank. About a year later, my parents climbed to the roof of their Los Angeles house to enjoy the 4th of July fireworks display. After carrying up camping chairs and snacks, my mom started back down to get Erica and bring her up as well. She discovered that the 18-month-old was already halfway up the ladder. At age 5, she decided she was going to learn how to ride a bicycle. The problem was that the only bike around belonged to her older friend, Shawnee, and was really too large for her. Nevertheless, she went out early one Saturday morning and spent the whole day with her hair flying in the wind, crashing into things and skinning her knees and elbows. Her feet barely reached the pedals of the bike, but by evening she was riding it.

Erica’s strength and independence were intimidating to me. Moreover, interacting with her involved contending with the sheer force of her passion, which was sometimes concentrated in a way that made me her opponent in the matter at hand. I learned quickly that I was usually better off letting her have what she wanted, although I balked at some things. Somehow, our mutual environment and disparate personalities created an adversarial relationship between us that got stamped in. I suspect that our conflicts arose out of our contention for the scarce emotional resources in my troubled family. We fought bitterly, even into adulthood. Our pugilism was more a product of distrust than of enmity, but we didn’t know this. Each of us thought the other was secretly waiting for the next opportunity to strike. Our battles left us both unsure about the other’s feelings, so periods of peace were tenuous.

Then, somehow, the tandem illusion dissolved, and we realized that we loved each other. After that, our dealings were almost completely free from the bitter contention that once so colored our interactions. Peace became our new normal. We were freed to help and bless each other, and even share our prickly postwar adventures. I discovered that when she was at rest, she was more angelic than most people with half her strength. I was finally getting to see the person behind the curtain. The foe I thought she was for so many years was nothing more than a tender soul warding off the violent world.

There is a hurt child in every one of us that cannot help being angry about the injustice that chokes the world and deprives us of satisfaction. But Erica overcame her anger, thanks in part to having a faithful, steadfast husband and two daughters to raise. Their need for love helped the battered angel inside her to keep asserting itself. Whatever treasures she had missed out on during the first part of her life, she strove to give to Analysa and Lauryn. Children are like a second chance at life: triumph by proxy. She found her life by pouring it out for the sake of her family. This is a sacred arrangement, established by God. In the Creator’s looking-glass economy, investing in others multiplies our personal harvest. 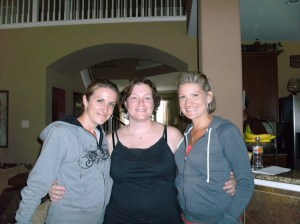 Erica (center at right) learned this lesson well. In 2011, my Auntie Sarah hosted a family reunion in Columbia, Tennessee, which Erica and I both planned to attend. At the time, Erica was living in Odessa, Florida and had to drive more than 700 miles each way to go to the reunion. However, she knew that I wanted to find a way to see our father in Pensacola during the short time I was down there. Because of his age, our geographical separation and my financial scarcity at that time, I hadn’t seen him for more than two years. So she made arrangements with him, quite without my prompting, and during the week of the reunion, she drove us from Columbia to Pensacola and back (adding 12 hours of driving chores to her own trip) so I could visit with our father.

I arrived in Tampa Thursday exhausted and bewildered . As I greeted my mom at the airport (she arrived a few minutes after I did), I found I had no comfort to offer her, nor she to me. We could do little but exchange sad looks as we went about our melancholy business. After taking a quick shower to make up for the one I hadn’t been able to take before getting on the plane, I left with my mom to drive out to the hospice.

I felt a great sense of dread. I didn’t know how to handle my feelings about what was happening. Those feelings would burst forcefully to the surface when I saw Erica settled in at the place where she was preparing to walk off the stage of life. What could I say to her? The moment called for words of comfort and good cheer, and I was fresh out of both. 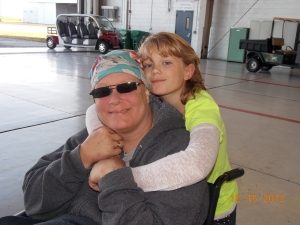 However, it was Erica who comforted me. After having confronted her own feelings squarely in the matter, she had made her peace. My mom related to me that she had spoken to Erica on the phone the day before in the precise moment of realization. Erica had been sobbing: “This is it. It’s all over!” She was in great anguish.

But now, a day later, she was lucid and cheerful. She had regained her sense of humor, and the reality was that her predicament, so disagreeable to her and the rest of us, had removed the weight of her troubles so she could concentrate on saying goodbye to all of us.

The hospice is as lovely a place as anyone could ask for to spend her last moments. It is spacious and quiet, decorated beautifully and staffed with gentle, compassionate people. All the employees at the facility seem to carry an endless supply of optimism around with them. Every convenience is provided to ease the way for pain-stricken families. Any guest can visit the kitchen in the lobby to make use of its offerings of hot soup, cold sandwiches, coffee and iced tea. The grounds are manicured and serene. A hundred feet from my sister’s room is a pond with a fountain at the center. At all times, you hear the soothing sounds of splashing water. There is a walkway encircling the pond, festooned with trees and shrubs and a gazebo towards the far side.

I have been blessed to have this time with Erica, whose mind and personality have been perfectly intact most of the time. I found, happily, that I am simply enjoying her presence as we have expressed our hearts and shared long-forgotten memories. She told me proudly how she had been visited by no fewer than eight Coast Guard officers (my brother-in-law is a Coastie), including Paul’s base commander, who presented Erica with a certificate for her 15 years of caring daily for her husband and family, which in their estimation contributed immeasurably to Paul’s service in turn to the Coast Guard. She and Paul were each given medallions as the presentation ceremony finished.

Yesterday afternoon, Erica gave me a rare gift: the wedding band that was worn by our paternal grandfather, Jack Abbott, who passed in 1965. She urged me solemnly to begin using it very soon (I have been hoping and praying for a godly wife) and to pass it on to my firstborn son, or to the next most proximal heir.

In all this finalizing activity, I can still feel my sadness bubbling up, but more often I feel grateful that we have been able to meet this event with dignity and expressions of affirmation all around. There is much more love in our family than we knew while we were still grappling with life’s more superficial issues. Erica’s departure has brought us around directly to what is crucial and everlasting. I sense that Erica is beginning to see the arms of God, open to receive her at the other end. There she will bond with her Savior and stretch out her own arms to greet me when I get there.

I love you, Erica.

I am a freelance writer by trade, philosopher and comedian by accident of birth. I am an assiduous observer of humanity and endlessly fascinated with people, the common elements that make us human, what motivates people and the fingerprint of God in all of us. I enjoy exploring the universe in my search for meaning, beauty and friendship. My writing is an extension of all these things and something I did for fun long before I ever got paid. My hope is that the reader will find in this portfolio a pleasing and inspiring literary hodgepodge. Good reading!
View all posts by Douglas Abbott →
This entry was posted in Grief and tagged bereavement, Grief, grieve, heaven, hope, hospice, illness, life after death, loss, redemption, sad, sadness, salvation. Bookmark the permalink.